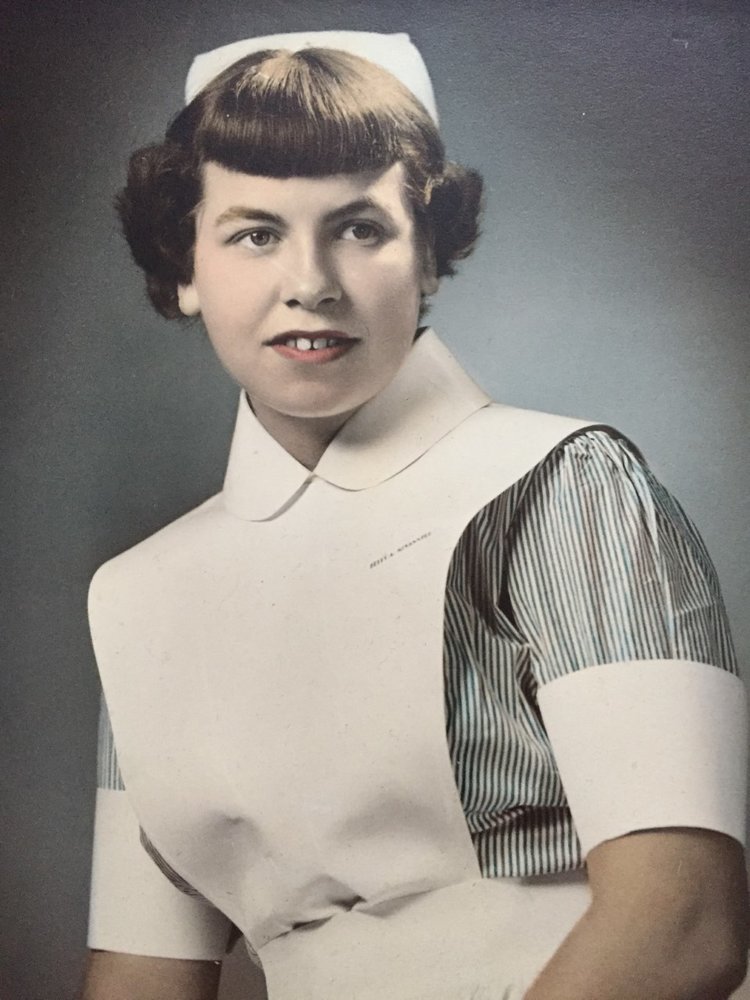 Betty Ann McVannell passed away on the evening of Tuesday December 22, 2020 after a tenacious struggle between leaving this world and remaining part of it.

She was a loving provider and mother to her daughter Felicia before it was very common or acceptable to be a single parent. She was generous Grandma Bette to Nimue and doting mother-in-law to Kevin, for both of whom she knitted and crocheted many colourful berets over the years. She was a tremendously hard-working nurse for 40 years after her three-year live-in training at Chatham General Hospital in the early 50s. She was a traveller who worked in Vancouver, Leamington, Whitehorse and Toronto and followed Felicia around for visits to Japan, the Dominican Republic and Turkey. She really, really loved ice-cream and had a laugh that could – and perhaps occasionally did – wake the neighbours. She enjoyed telling a story as much as she relished hearing a good one.  Bette provided a safe space for Felicia’s friends and was reliable Aunt Bette to her nieces and nephews.

Bette sometimes complained that being the youngest of Sarah Pangborn and Peter McVannell’s five children, (Ted, Eleanor, Don and Tess) she was the one called upon to care for her parents when they were ailing.  What they knew was that she was reliable, caring, responsible and answered the call of family and friends in need; always a nurse at heart.

Betty spent most of her retirement back in her hometown of Rodney with her sister Tess and a fun crew of friends – some of whom she had known since childhood.

Recently, the effects of dementia took a toll on her spirit but not always on her sense of humour.  She maintained her very fierce sense of independence until very near the end.  In the face of this independent streak, the staff at Grey Gables Long Term Care Home in Markdale and the staff at the Michael Garron Hospital site at Kew Beach in Toronto have been caring, patient, fun, professional and especially kind.  Prior to her hospital and long term care stays, Bette lived at the St. Clair O’Connor apartments in Toronto where the staff – under the warm guidance of Maciel A. – did their best to care for an old lady who often insisted she didn’t need any care.

A heartfelt thank you goes out to Wendy B who stepped in as Betty’s surrogate daughter while Felicia and family were away in Vietnam, keeping Bette in stitches and in ice cream.

She will always be loved by Felicia. She will be missed by many, among them: Kevin and Miss Nim, Cathy and Bert, the Ganguly family, Jill and Jill and Wendy, cousin Joanie, Tony and Holly, David and Janice, Peter and Joyce, Rich and Janice and Bob.

Bette lived a long, healthy, interesting and generous life.  She tired herself out and has earned a peaceful rest.

Donations can be made to the Red Door Family Shelter  reddoorshelter.ca

Friends and family are invited to participate in Bette’s Celebration of Life on Thursday, December 31st at 12:30 pm by visiting westelginfuneralhome.com and clicking on Bette’s tribute page.  The video will be at the bottom of the page.  While there, feel free to share a memory of Bette.  Arrangements entrusted to DENNING’S OF RODNEY 519 785-0810