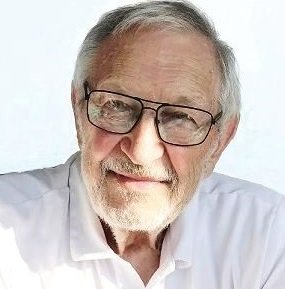 Denning's of Rodney
212 Furnival Road, PO Box #94
Rodney, Ontario, Canada
(519) 785-0810
Walter (Bob) Babin 1934-2020 It is so humbling to be a daughter of a genius. There is no summation that can do justice to who my dad was. He pursued so many passions. He loved reading. My fondest memories are of the Saturday trips to the library to load up on books for the week. Sunday mornings were for classical music. You could often see him conducting Gilbert + Sullivan's Mikado or Tchaikovsky's Capriccio Italien through the living room window. Even in the early years he was a character, full of life and curiosity. He was very playful and extremely competitive in all things. He loved literature, Greek mythology, ancient philosophers and poets from across the centuries. He studied all religions and respected their diversities and similarities. He was an eloquent writer himself and was known for his humorous and heartfelt poems. Dad's life work was in a realm that I could only scratch the surface of understanding. He spent over 50 years on theoretical physics, studying life's mysteries through mathematical equations that could now span a football field. Only a few will ever understand his work but many will come to realize that we have lost a truly modern scientific and philosophical thinker. He leaves behind family, friends, colleagues and a world that never fully appreciated his brilliant mind. Some day in an enlightened world, you will find him in the history books and science journals. He accepted three invitations to speak at international science symposiums – two in St. Petersburg, Russia and one in Prague, Czech Republic. All things considered, he was a modest man and the only credit he ever really gave himself was to say of his work: “not bad for a high school dropout.” He was self-taught with no formal training in any of his passions. He had a hunger for knowledge and a natural curiosity from the day he was born. He felt his relentless pursuit and unexplainable drive for his work was intervention of a greater force. You can “Google” Walter Babin. He founded the site called The General Science Journal. It is the window into his world. Even NASA is intrigued. A glimpse into his philosophy was that of parallel universes and dual states. As he explained to me in simple terms: “every action has an equal and opposite reaction”. Where there is life, there is death. Where there is death, there is life”. The following quote is from Chinese Proverbs, a nondescript book from his library, and is so apropos: "The world's affairs are but a dream in spring. Look upon death as a going home". His philosophy gives me comfort. With this thought, he has reunited with Mom and now walks among the great thinkers of all time. The four essential elements of nature – earth, air, water + fire have always been a basis in our discussions. If you wish to honour him, please light a candle. He is a flame that will, for me, never burn out.

He was a loving husband to the late Sylvia (Miller), father to Karla (Raouf) Wilson and proud grandfather to Andrew and Sean. He is survived by his two sisters Pam Butnari and Julie Sura. He was very grateful to his brother and sister-in-law Bob and Audrey Miller for their constant care and support.

The family would like to thank the doctors and nurses at Chatham-Kent hospital for their kind and constant communication and exceptional care.

In lieu of flowers donations to the Canadian Kidney Foundation (kidney.ca) would be very much appreciated.

Arrangements entrusted to Denning's of Rodney. Share a condolence online at www.westelginfuneralhome.com.

Share Your Memory of
Bob
Upload Your Memory View All Memories
Be the first to upload a memory!
Share A Memory